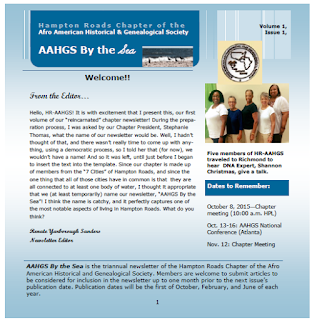 Without fanfare the Family Search Beta site has released a set of records entitled Virginia, Freedmen’s Bureau Letters, 1865 - 1872. Attempting to respond to a query by someone on Afrigeneas, I tried to locate the document she had posted, which she had said was part of the Freedmen’s Bureau Letters 1865-1872. I googled that term and it took me to the Family Search Beta site. Although I found the record she cited with the person she mentioned, I was not sure where I was in the Bureau records, by last night I had figured it out….what Family Search had released was Record Group 105 of the Records of the Field Offices for the State of Virginia, Bureau of Refugees, Freedmen and Abandoned Lands, 1865-1872……… Indexed by Name and digital images, over 800, 000 images on 203 reels of microfilm. A Gold Mine for African American Researchers (and not just Virginia Researchers).

It is incorrect to say that those who were enslaved are not in the records prior April 1865 and the end of the Civil War and the general emancipation, look at any county court record where “property” is listed wills, deeds, we are there…but those enslaved individuals do not speak for themselves….in these FB Records many of the people we seek “Speak for Themselves”..give their names, their children’s names, wives, go to court, make labor contracts, complain about their treatment as Free Men and Women, ask for transport back to their homes after they had run to Union held territory in VA to contraband camps, marry, take a census…too many other things for me to mention.

In 1993, James Walker , co-founder of AAHGS and Archivist at the National Archives had spoken to our AAHGS Chapter about the historical value and the immense wealth of information of these records and implored us to go and see them. A couple of months later I did have an opportunity to see some of them. They were not microfilmed and in their original state, I was overwhelmed. In the early 2000’s these records were microfilmed. Thank You Pearl Alice & Reginald Washington for your efforts on that project. The VA records took 203 reels of microfilm to complete.

In March 2007 Dr. Darrell Walden gave a presentation to our group (AAHGS Hampton Roads VA) entitled “Whispers From the Dust – The Freedmen Records and African American Family History” . Dr. Walden had spoken to other AAHGS Chapters and other groups about an Extraction and Indexing Project of the names that appear in all of the 203 reels of VA records. Many of us were inspired to work on that effort. It was finally complete in 2008. It has taken awhile but it is finally online. I know you all want to know how to get to the records but I did think that it is important that those people and there are many others, who understood the immense value of these records for family researchers, historians, be remembered and given credit. These documents not only tell the story of OUR participation in Virginia’s and the Nation’s history at a most crucial time period, but others as well, Freedmen Bureau officials, White Virginians and ALL who had contact with the Bureau, for whatever reason.

I can’t promise you that everyone will find what they are looking, nor will it be easy to maneuver thru this site (I have been working on it all day) but it is an incredible resource. I strongly suggest that you look at the Descriptive Pamphlet which describes what is in this Record set and gives a general description of what is on each reel…this is a link to the pamplet at NARA:

To Start the Search
Go to Family Search Historical Collections :

Put in a name, it will take you to each image where that name appears, (hopefully no one is looking for John Smith). You then click on the image. Yes, you have to read it…and the handwriting is not always good, and some images are faint…and maybe the names are not always spelled they way you think it should be spelled (like the census Spelling don’t count), or maybe we didn’t transcribe it the way you think we should have…but you are at home on your computer. So don’t complain.

When you find someone, remember you are looking at an image without a context, you need to understand the context in which this record was generated, which is why I suggest you Read the descriptive pamphlet (those folks in my group..we passed out these pamphlets a couple of years ago..go find it)
If you have the descriptive pamphlet…Read what is on the reel, that might be of interest. This is the link to the page with each reel . The numbers there DO NOT match the Reel Numbers, but there are 203 individual numbers there that reflect the 203 Reels.

There is going to have to be some serious indexing on what is on each reel. Although there are 203 sets of numbers, they don’t exactly match the reel numbers. But this is a Wonderful Beginning.

Good Luck and Good Hunting.
Posted by AAHGS Hampton Roads at 7:05 AM No comments:

Welcome to the blog of the AAHGS-Hampton Roads. We are a chartered member of the Afro American Historical & Genealogical Society and are also known as the Virginia Society for Black Historical and Genealogical Research (VSBHGR).
The purpose of this blog is to highlight the accomplishments of our organization and its members as well as to disseminate information about our activities and events.

Our organization was organized on July 17, 1986 for the purpose of providing support for its members and others interested in learning about their African American ancestry. On April 10, 1993, the group was chartered as an AAHGS chapter.
The major focuses of AAHGS Hampton Roads are as follows:
AAHGS Hampton Roads meets monthly except for July and August.  Click here to view our 2011 Meeting Calendar.
Posted by AAHGS Hampton Roads at 10:29 AM No comments:

AAHGS-Hampton Roads is a chartered member of the Afro American Historical & Genealogical Society (and is also known as the Virginia Society for Black Historical and Genealogical Research (VSBHGR).

The organization was formed in 1986 to provide support for its members and others interested in learing about their ancestry.

The organization provides the setting for individuals to meet, to learn about the techniques involved and to share information and experiences.

Provide a forum for exchange of information and ideas concerning the issues involved in black family research.